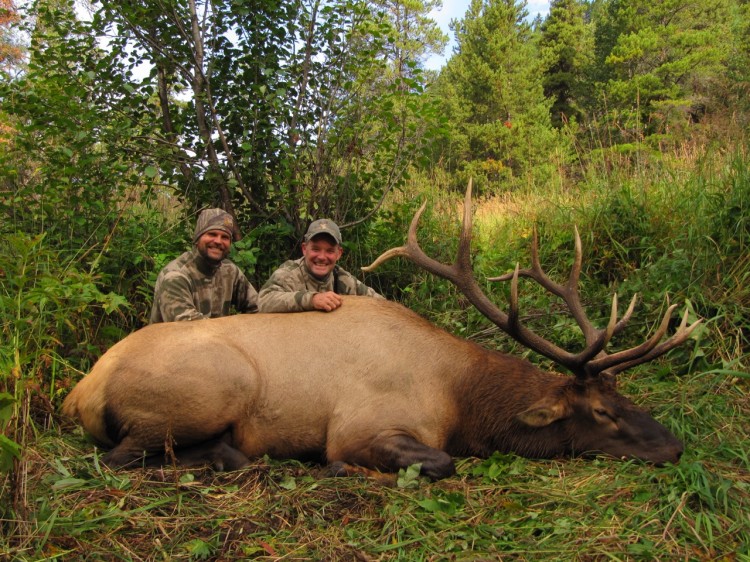 British Columbia offers a great deal of potential hunting challenges, ranging from prey animals like mule deer all the way up to massive predators like grizzly bears. Somewhere in the middle of these potential quarry lies the elk. Elk hunting BC is among the least complicated hunts in British Columbia a hunter can undertake as the creatures are not endangered, and are in fact quite prolific, sometimes to the point of being problematic. However, their size is a sight to behold and their antlers make some of the best trophies available in western Canada. Further, they can be quite challenging game, particularly given that they are quite well adapted to fending off natural predators such as wolves and escaping larger predators such as bears.

Known in Shawnee and Cree as waapiti (meaning ìwhite rumpî), the elk of British Columbia are prolific enough to be considered a species that is acceptable to hunt. Inhabiting the forested hills and taiga of the wilds of British Columbia, elk hunting BC usually occurs in the month of September. This is when the elk are in their rutting season, preparing to mate and then breed. Because the elk are often preoccupied and more willing to brave the lands outside the deepest wilds in search of mates, this makes it a fairly ideal time for a patient hunter to bring in a sizable bull. However, due to laws about British Columbia elk hunts, only bulls may be brought down; cows and calves of the species are not legal game animals and few legitimate hunting outfitters will assist a hunter in bringing in these specific elk.

The creatures are well adapted to clashing with predators, ranging from coyotes to cougars. Their massive size and herd tactics will find off most predators that face the entire herd, and any veteran hunter will tell you that messing with the entire herd is a very bad idea. Lone males during the rutting season seldom have herds, but their massive antlers allow them to gore any potential predators that they deem threats. It is for this reason that hunters are advised to be more careful around these creatures than they would lesser game such as mule deer. Additionally, these animals are prime prey animals for many other species of predator beyond just humans, and it is not uncommon for black bears and wolverines to be drawn to elk carcasses brought down either by other animals or human hunters.

The forest and forest edge terrain these creatures inhabit can, however, be treacherous; as picturesque as the lands of British Columbia are, they can be dangerous and inexperienced hunters will likely need a guide to the lands of the region. However, with the right outfitter and the right hunter, the province can almost ensure a large bull elk to any hunter willing to get a permit and put forth the effort to hunt it. Six point bulls are incredibly common in British Columbia in September, and larger, more impressive bulls are far from unheard of in these wilds.