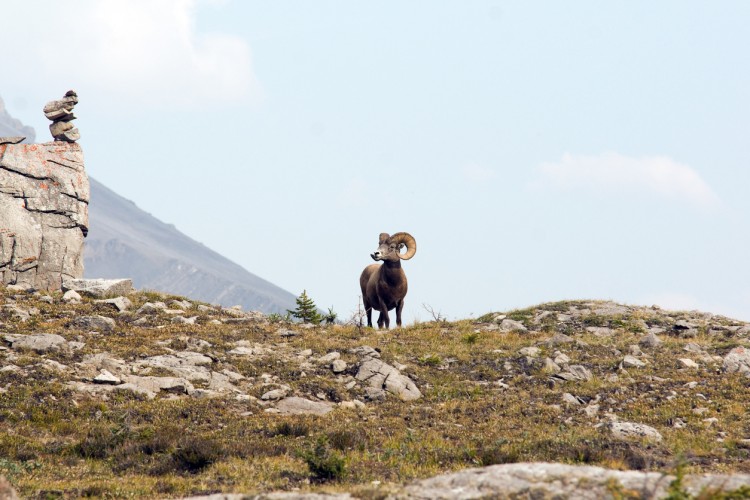 Intriguing game of the British Columbian peaks, the bighorn sheep

Bighorn sheep are, true to their name, a wild species related to the domestic sheep that humans have domesticated and cultivated for centuries. These sheep, however, are not simply placid grazers, but wild and untamed survivors who have thrived in North America since the Pleistocene. Bighorn sheep are named for their large, curved horns, some of which can weigh as much as 14 kilograms, while the animal itself can weigh as much as 230 kilograms (males at least; most females are far smaller, weighing around 90 kilograms), particularly in British Columbia. The bighorn sheep of British Columbia is the subspecies known as the Rocky Mountain bighorn sheep. This subspecies is hardier than most, surviving in cold temperatures its desert brethren couldn’t handle and being perfectly built by nature to handle steep, rugged terrain as well as human climbers without the benefit of tools. The
animals graze on grass and shrubs and seek out natural salt licks to get minerals in their diet. In an odd bit of sexual differences, female bighorn sheep tend to forage and walk, while the larger bodied and horned males tend to eat and then rest, which leads to a greater increase in body size. Bighorn sheep live in large herds and while they typically do not follow a single leader ram, though rams will clash horns to establish dominance and mating desirability during the mating season. These clashes, which can damage the sheep’s horns, also happen sporadically during the rest of the year.

Like all game species in British Columbia, the local government maintains restrictions on what can and can’t be hunted. While big horn sheep are fair game, it is only during a specific time that bighorn sheep can be hunted legally. Honest hunters would do well to bone up on local hunting rules and regulations before going on a bighorn sheep hunt. Further,
Canadian firearms laws make rifle hunting a bit of a complicated matter, though it is not entirely unheard of hunts in British Columbia to use basic hunting rifles. Bows and crossbows labor under far less restrictions. Hunters are advised to be careful, particularly on the treacherous Rocky Mountains, as rock slides do happen. Further, the bighorn sheep is not a docile animal and may get violent when it feels threatened, but that is all part of the challenge.

So, if you’re planning on some British Columbia bighorn sheep hunts, make sure you keep this information in mind.

Bighorn sheep are, true to their name, a wild species to hunt.